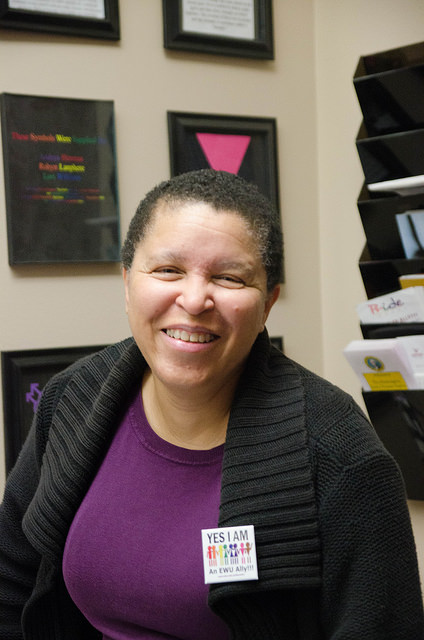 When Sandra Williams, EWU Pride Center coordinator, heard her daughter expressed a desire to see her mom be able to get married too, it really struck a chord with Williams.

According to Williams, she already had a commitment ceremony with her partner, but when she saw her daughter want the validity that a marriage gives a relationship and a family, Williams realized she had not thought about that perspective before.

Now others like Williams are able to legally marry in over half the states in the U.S. because the Supreme Court refused to hear seven different petitions from circuit courts banning same-sex marriage on Oct. 6.

“It was a net victory for marriage equality even though the Supreme Court actually didn’t do anything,” said Thomas Hawley, associate professor and chairman of the government department at EWU.

David May, an EWU professor of government, said there are three major level of courts in the United States. Every state has a district court in it, at least one. Those district courts in the states themselves are grouped into what are called circuits. Circuit Courts cover between three and nine states.

According to May, currently all but three circuits have ruled in favor of marriage equality. The only circuits left are the 5th circuit and the 11th circuit, which are very conservative southern circuits, and the 6th circuit which is a fairly conservative circuit.

“I think there’s some logic behind sort of letting the country sort of work it out for itself, and that seems to be happening, because a while back the big argument was that no state would vote it in. So when that happened that’s when you saw the tide change,” said Williams. “It did happen and multiple states voted to support marriage equality … there is something about having the country incrementally work it out on a local level. I think that makes it more powerful than if there was a mandate that was handed down. Some people would disagree with that, but I think it’s kind of exciting.”

Hawley’s stance on the Supreme Court’s action, or inaction in this case, varies from Williams’.

“I don’t trust all of the circuit court systems in this country to come to rational decisions about things. I would like to see marriage equality be the law of the land and so leaving it up to sort of this patchwork arrangement of circuits that we’ve got in this country probably slows that process down a little bit,” Hawley said.

May said that the answer could be that passivity is part of the Supreme Court’s strategy.

“If you decide to take that case and you lose, you’re done,” May said.

Hawley says that the Supreme Court is playing it safe.

“The court is really sensitive to accusations that they’re meddling in political matters ,” Hawley said. “Everytime they have to meddle in a political matter then they get accused of either being liberal or conservative or crazy or you name it and they are not typically fond of that.”

According to Williams, either way, change will occur.

“There’s still other laws pending to appeals court, but I think it will expedite the process to hopefully all of the U.S. recognizing gay marriage,” said Sally Winkle, EWU Director of the Women’s and Gender Studies Program.

Williams draws a parallel with the past ban in the U.S. on interracial marriage and the current ban in some states on same-sex marriage.

“My brother is in an interracial marriage and just 30, 40 years ago he wouldn’t have been able to marry his current wife … it’s just wrong. We look at that and think that’s crazy that we had a country that thought that way. Well, this is sort of like that, said Williams. “My brother’s love for his wife isn’t any more valid than the love that I feel for a person that I choose to marry and so I think it’s time for the country to recognize that, that you can’t create different categories of love. That love is what it is.”