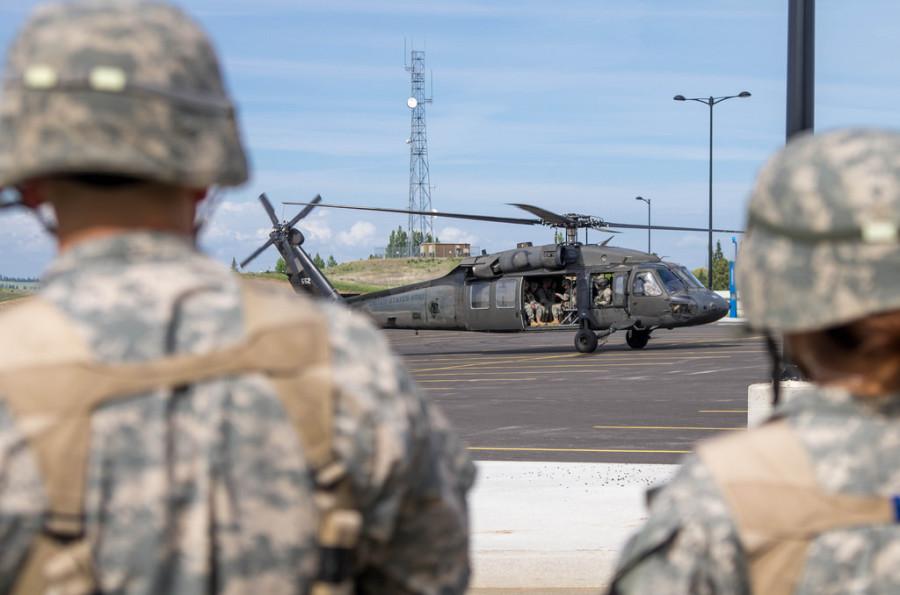 Cadets wait to load the Black Hawk helicopter on May 16 to do training in a wooded area.

After six years of unavailability, a Blackhawk helicopter dropped in on Eastern’s campus to help with ROTC training.

Each spring, EWU’s ROTC executes field-training exercises to practice what they have learned through the year.

On May 16, five squads of about 10 cadets patiently waited in the overflow parking lot near Roos Field for their turn to hop on board the Blackhawk.

Once aboard, the helicopter then took them into a wooded area where they would immediately begin training.

“They will be doing all of the things that we taught them prior to this day, which is leadership development,” Martinez said. “So, there are going to be scenarios like they are going to have to conduct an ambush. They’re going to pitch the plan on how to do that and then they’re going to put the cadets into position.”

He then explained his role for the weekend was adding variables to each scenario to see how the cadets would handle the sudden change.

“If we think the cadet isn’t being challenged enough, we would add like, if they’re doing an ambush, we might add in a civilian with a baby to see how they would react,” Martinez said.

Anthony Imperial, EWU junior and served in the army as a non-commissioned officer, went through the field exercise before and said it will consist of two parts.

He continued to explain how going through ROTC differs from simply enlisting.

“In the army there’s the enlisted, where you just go to basic training, no schooling required. As an officer, you have to have an education. ROTC kind of replaces basic training. ROTC has quite a few one to four year scholarships available,” Imperial said.

Another non-commissioned officer and EWU senior John Meier lent his best advice to his squad.

“You’re going to be fine. Just stay hydrated and eat. That’s pretty much it. Listen to your superiors. When you’re in charge, just be in charge. Some plan is better than no plan,” said Meier.

Phillip Matthews, a member of Meier’s squad and an EWU freshman, expressed his thoughts just before jumping into the Blackhawk.

“I’m feeling excited. I’m nervous for when we actually touch down, but other that I am actually pretty stoked,” said Matthews.

According to Martinez, the field exercise lasted until the following day, May 17  at 6 p.m.

He encourages anyone who is interested to give ROTC a try.

“The first two years is no obligation.  A lot of people don’t know that,” Martinez said. “They can come join our program, they can feel it out and if they don’t like it, they can leave next quarter.”