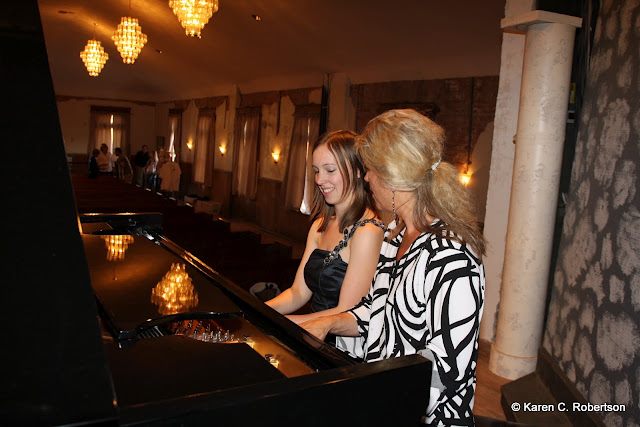 EWU graduate student Rebecca Hardy has been involved in helping restore an opera house to the town of Harrington, Washington.

In the little town of Harrington, with no more than 500 people, stands an opera house. Hardy, along with the Harrington community, dreams of renovating it into a community center.

“The renewal of the community, as a center for culture and art, is part of a lot of people’s vision for the future of this little town,” Hardy said.

Hardy said Harrington is very welcoming and warm. Her husband is a native to Harrington, and when they got married, the town immediately welcomed Hardy into their midst.

The history of the opera house influenced Hardy to work on the renovation. She said she appreciates the past, present and future it has to offer.

“There are posters of plays from 100 years ago and photographs from days gone by, as well as the potential for the future,” Hardy said.

Since Hardy is a graduate music student at EWU, she felt she would be able to help them prepare for the purchase of a piano.

“With a piano, especially with the quality and name recognition of Steinway, the Harrington Opera House could become a world-class venue, similar to those in other small communities that draw nationally-known talent because of the quality of the instrument and environment it houses,“ Hardy said,” A piano allows classical, jazz and many other genres of music to be experienced very vividly in live performance.”

When the decision was made to raise funds for a 7-foot grand piano, Hardy decided to put on a variety of concerts in the venue as fundraising events and performed herself in 2012 and 2013.

“This allows me to use my passions for music and for people to join and for me to give back to this wonderful community that has been so supportive of me,” said Hardy.

For the concert in 2012, Hardy and her husband contacted many businesses for sponsorship in the months leading up to the concert. After finding more than 10 businesses to support them, they reached out to their EWU professors to fill the program.

Next, Hardy contacted Steinway Gallery of Spokane to discuss the rental of a piano. After telling the company about the project, they decided to rent the piano to Hardy and waive the $1,000 cost.

“They did not have a 7-foot piano in the shop at the time, so they brought out the best piano on this side of the state: the signed 9-foot Steinway D-concert grand piano. Its approximate retail value is $150,000,” said Hardy.

“Many people in that town turned out just to witness the piano move that day,” said Graves.

The concert, Hardy explained, was warmly received. She said there were around 80 people in attendance and many generous donations were received.

“The concert itself was packed with people from all over the region, and it was clear as we performed for them, that it truly was a unique experience, and the people who attended were excited about future concerts in that space,” said Graves.

The following year was even bigger. Hardy once again rented a Steinway grand piano for the performance, the public broadcasting station sent a representative to the opera house, and it was featured on “Northwest Profiles” in October 2013.

“[Hardy’s] energy and interest in the Harrington Opera House restoration illustrates her willingness to bring attention and creative possibilities to make this historical building a thriving and active arts center,” said Graves.

Hardy said she asked Graves to perform again, but she was unable to, so Hardy called upon her peers. EWU students Riley Gray, Emma Mortensen and Mikaela Elms all performed with Hardy in 2013.

“We doubled the number of local sponsors and raised even more funds from an audience that was almost twice as numerous as the previous year. While the concert occurred in September, we received donations for months after, extending into January,” said Hardy.

Hardy is continuing work with the Harrington Opera House fundraisers and has big hopes for the historic building. She said herself and the community members of Harrington would love to get more community involvement and reach more areas, such as Spokane.

“So many wonderful things are happening each year as the building gets renovated one small project at a time. We would love to share our community prize with those in Spokane and neighboring areas, as it is something that can be appreciated by many people,” said Hardy.

The Harrington Opera House is open for tours, and Hardy encourages students to attend the car show and quilt show on April 26.