Redskins need to take a cue from EWU 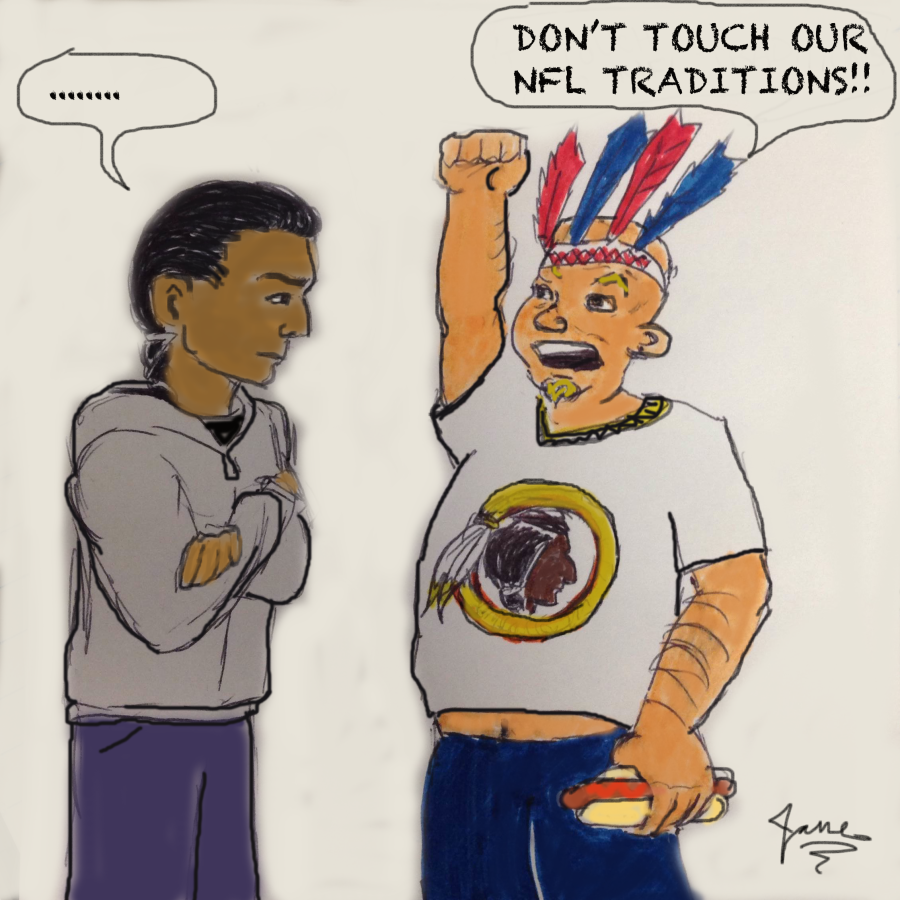 If you walk into the Phase on campus, you will notice a lining of old, tattered grey bricks outlining the walkways and hallways. But if you take a minute to examine a few of these stones, you will notice an Indian caricature engraved. Only a few remain after EWU made a conscious effort to distance themselves and the university from their old mascot by sandblasting the majority of the “Savage” bricks into oblivion.

But that was nearly a decade ago, and the name changed a little over 40 years ago. In 2005, the NCAA ruled that colleges with mascots that were deemed “hostile or abusive” would not be allowed on team uniforms or any type of clothing during postseason play.

The NCAA did the right thing. What is confusing for me is why it is so difficult for professional leagues, primarily the NFL, to grasp this concept and fall in line.

For the past year, we have heard numerous quotes from NFL commissioner Roger Goodell and Washington Redskins owner Daniel Snyder regarding the “tradition” and “history” surrounding the team name. “The Washington Redskins name has … from its origin represented a positive meaning distinct from any disparagement that could be viewed in some other context,” Goodell wrote. “For the team’s millions of fans and customers, who represent one of America’s most ethnically and geographically diverse fan bases, the name is a unifying force that stands for strength, courage, pride and respect.”

While Goodell’s comments are clueless and political, it is Snyder’s actions that have been the most brazen and self-serving.

On March 24, Snyder sent out a mass email to Redskins fans introducing his new foundation, “The Washington Redskins Original Americans Foundation,” appropriately acronymed OAF. In the letter, Snyder wrote, “I’ve listened. I’ve learned. And frankly, it’s heart wrenching. It’s not enough to celebrate the values and heritage of Native Americans. We must do more.”

Snyder throws in a couple quotes from people that are the rough equivalent of the “some of my best friends” strategy that works so well for white people and says he and his OAF staff have already gotten to work. One of their efforts? Distributing winter coats to Native Americans in the frigid plains. They also bought a backhoe to enable the completion of “the burial process for their loved ones even in the coldest winter months.”

All of this would be an amazing second step in fixing the problems facing the indigenous community where the official poverty rate on reservations is 29 percent and 36 percent of families with children are below the poverty line on reservations, as determined by the U.S. Census.

But Snyder missed one step he could accomplish tomorrow if he felt compelled to do so: changing the offensive team name. Without that, his charitable efforts come off as completely egotistical and hollow.

All of this is so clearly in response to the growing (and decades late) public sentiment that racial slurs are wrong in any context and this one is particularly embarrassing and hateful. This is nothing more than a power play to acquire enough goodwill within the Native American community to silence their complaints.

Snyder goes on to say, “But the fact is, too many Native American communities face much harsher, much more alarming realities. They have genuine issues they truly are worried about, and our team’s name is not one of them.”

After reading the email in its entirety, all of this becomes insultingly transparent. It also becomes clear just how naïve and uneducated Snyder is on the community and issues he wants to represent.

According to Dr. Cornel Pewewardy, who is an assistant professor in the department of teaching and leadership, school of education at the University of Kansas, many do not recognize that the American Indian mascot issue is as important in the American Indian community as alcoholism, substance abuse and poverty. Some people excuse their ambivalence of the issue by echoing the sentiments of Snyder.

They are missing the point. It is hard to empathize with them when they are always portrayed as stereotypes. These “make-believe” Native Indians are prohibited from changing over time to be like real people. They are denied the dignity of their tribal histories and the validity of their major contributions to modern American society.

These racist mascots give life to racial stereotypes, as well as reviving historical patterns of appropriation and oppression. These results often foster discomfort and pain among American Indian people.

Pewewardy also notes that “many European Americans rely on these manufactured images to anchor them to the land and verify a false sense of history.” Something Goodell, Snyder and the rest of white America seem to misunderstand. The history of Native Americans, or any other minority group, is not theirs to share. It belongs to that group of people and nobody else.

Nichole DeVon, a member of the Southwest Mescalero Apache tribe who works in the EWU American Indian Studies Program, teaches classes on race, privilege and power and works with native children on local reservations, has found that most of the “shared history” that Goodell and Snyder speak of is false and dehumanizing in and of itself. “The idea or the thought of Redskin came from the idea of scalping. The Dutch, I believe, used to try bringing back full hides and bodies of Indians and it became too much. So they decided to just begin scalping. So it is not as much about the skin color as it is about the blood.”

“This type of dehumanization has been done to all types of people. But unfortunately, when you have the talks about race or dehumanization and all of those things, it is difficult because [Indians] are considered invisible.”

In 1998, an organization known as Children Now initiated a study of children’s perceptions of race and class in the media, focusing on images of American Indians presented in national news and entertainment. The study revealed that most children in America view American Indians as far removed from their own lives. In 2001, the U.S. Commission of Civil Rights conducted a similar study and found even more damning evidence of the effect of dehumanizing stereotypes.

“When any of these images are put out there, this reinforces [white] superiority and makes them feel better about themselves. But when native youth [see these images], that actually reinforces the internalized [racism] going on,” DeVon said. “Because they see these negative stereotypes and internalize it and that can affect a plethora of things from academic achievement to positive self-image. All of those different things are affected when people are able to continually perpetuate these negative stereotypes of Native Americans.”

“Young [Indians] buy into these stereotypes hook, line and sinker. They are like, ‘Oh these are great images’ and they wear the Cleveland Indians hats and they think it’s this great representation. But the thing is these images were never made to honor us.”

And that is the bottom line. The Braves, Chiefs, Redskins and even my old high school mascot, the Indians, are very rarely used to honor these communities no matter how much the uninformed seem to believe they are.

The best thing these teams could do is take a page from EWU and other universities’ books and sandblast these names into the past where they belong.