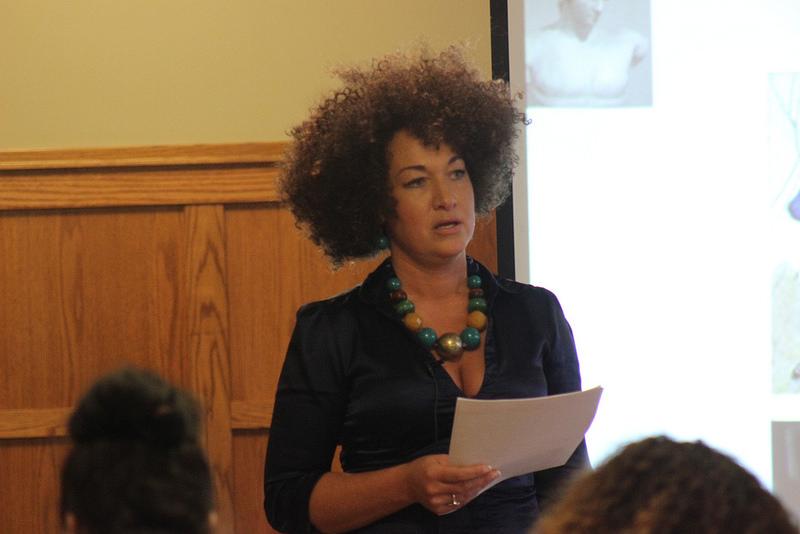 Editors note: this article contains a racial slur that may offend readers.

Rachel Dolezal has been a professor at Eastern since 2007. Dolezal started her teaching career at Howard University in the art department. While at EWU, Dolezal has taught African and African-American art history, World Art with a focus on Native North American art history and, most recently, in the Africana studies program.

Rachel Dolezal: I’ve reflected on the various locations and what the similarities [and] differences are. I think rural Montana and Idaho, … as well as Mississippi and South Africa have similarities in the racial polarity and tension. I am always a sort of “bridge” between white and black worlds, so I’ve grown accustomed to feelings of isolation and the necessity of developing my own self-worth in spite of what people say and do.

In South Africa, the kids would beat up mixed kids for having darker siblings, but when my darker brother stepped in, they grabbed sticks and beat him, then threw rocks. We were home-schooled sometimes because of this and other social pressures. Although there is nothing that can be said to minimize the impact of racism in Mississippi, I was part of a vibrant community in West Jackson and the support of everyone working together toward community development was truly fantastic. I haven’t been part of a community like it since.

In Idaho, I directed the Human Rights Education Institute and had eight hate crimes [occur] toward me and my kids in three years. We moved to different locations, but every house was burglarized or broken into. My youngest son still has trouble sleeping at night due to some of the armed robberies. Nooses were hung on our house and swastikas put on my office door. We had death threats frequently and an attempted kidnapping of my son when he was in second grade.

The only place I’ve ever lived where I felt like I could relax and just be myself was Washington, D.C., I am in love with the East Coast area, because it is much more international and you can find cultural company and kind of blend into the mix of people better than areas where there is either an absence of a strong black community or an extreme divide that sets up rifts equivalent to segregation. Probably one of the reasons I love D.C. the most, though, is because I was at Howard University. As a school that exists to promote Black values … it is definitely an oasis.

RD: I grew up in a very religious family that used corporal punishment as a way to keep their kids from going to hell. … I got beaten with wooden boards and spoons a lot and had to do manual labor jobs like digging potatoes or pulling thistles and weeds, whereas my siblings, who were darker, … were beaten with a baboon whip … and sometimes [my parents] would call the cops on them to get [my siblings] in trouble if there was a sibling disagreement in the teen years. Another punishment was to be confined to your room for up to 2-3 months … with nothing but a mattress and a Bible. You were let out to use the bathroom and eat.

My younger sister started scratching and cutting herself from this experience, and they sent her away at age 13. She was in a home for abused and neglected children till she turned 18. Another one of my brothers was sent away to a reform school because he “had anger issues.” She was the darkest girl in the family, and he was the darkest boy in the family. Most of my siblings were adopted so our parents could get a tax write-off and “not have to pay any tax dollars toward government funded abortions” because that was against their religion.

All of this had a profound affect on me. I did everything I could to help my younger siblings and once everyone turned 18, I broke ties with [my parents] and don’t talk to them anymore. My real dad is my only extended family. I even sued my parents for abuse and got full custody of one of my little brothers and raised him as my own son. Most people don’t know that he’s not my biological son, because we started over and really let go of the past and built the life that we wanted to have. It has made me appreciate the closeness I have with both of my sons, because they are everything to me.

I think [my siblings and I] are fiercely loyal to each other due to the amount of trauma we have in our past and how that has forged a really deep appreciation for those people who are truly there for you. I am very open about the situations in my past because I hope that it helps people who go through trauma realize they are not alone and that their experience may be more normal than they might think. It’s been helpful to me to imagine that nothing is really the end of the world, no matter how painful and even close to death you might be … [my siblings and I] carry on with hope and create the future we want with whatever we have to work with.

TE: I read that you received a master’s in fine art from Howard University. What were your influences that made you choose that path of study? How have your life experiences influenced your art work?

RD: Well, originally I wanted to skip college and go directly into international humanitarian work. However, I was encouraged by my mentor to pursue a degree in something I loved to do so I could be of greater service in the long run and have a career to support my work financially. I have always been a creator, so art was a natural fit for me as a form of expression, social protest and community involvement. I also showed my art at the United Nations’ headquarters in New York that year, art I actually created during high school that illustrated the struggles and conflict in Rwanda and Burundi.

I had been making greeting cards and picking berries and wild mushrooms to pay for all my own school clothes and shoes since I was 9 years old, so being an artistic entrepreneur was nothing new to me. I won several national awards for my art before I reached the age of 20 and made my first sale of a painting for $1,250 in Jackson, Miss.

The images of my work depict friends and family, and although I was criticized for “not painting white people ”when I was in college, I always felt like that story was already being told, and I wanted to contribute images toward showcasing the triumph of the human spirit and the beauty of black people. From a very young child
, I knew that racism and colourism, light-skin hierarchies, were wrong, and everything I have been involved in has been another step toward protesting white supremacy, promoting justice or cultivating empathy and healing from trauma.

It is hard for me to talk about some of the past abuses in my family without tearing up about it. I still get emotional when I think about how my sister and I were both … sexually assaulted from a family member [and] how she experienced worse abuse than me. I had a five-year abusive marriage after finishing my terminal degree. I hope that somehow my younger sister can be spared this type of additional impact. I have always fixed her hair since she first had any, until she went into the group home and I wasn’t allowed to see her anymore. I still do my sister’s hair … it is such an important part of building, or rebuilding, self-esteem. It’s really been the main way we have built our relationship: Me braiding her hair and us talking about life.

All my life experiences affect my art, both visually and conceptually. I have done some public art projects directly related to human rights and social justice, but most of my images are more internal and emotive.

TE: In your lecture last week you talked about the history of hair and your work as a stylist. What made you want to focus on this area?

RD: I always loved braiding my own hair, but when my little sister was born … I really fell in love with African hair. I loved to create already, but braiding and styling her hair really inspired me to learn a broader set of techniques, understand which products that worked best and explore traditional African braiding and hair design. I love the boost of self-esteem and empowerment a girl or woman has when she looks in the mirror after I’m done with her hair and falls in love with herself.

Sometimes this is a life-saving mission as well. Just last night I transformed a 12-year-old girl’s hair. “Emma” is a biracial girl who lives with her white mom and tried to take her own life last week. Due to bullying at school and growing unhappiness about her appearance, she came to that point of not wanting to live anymore. [After doing her hair] she [was] beaming with happiness … and couldn’t wait to go to school today to show off her beauty and new hair. Her mom said she hasn’t seen her this happy in a very long time. This is the real reason why I do hair; it is a community service so vital to girls and women who are in a time of struggle. It may seem superficial to some people, but a hairstylist truly can change the course of a person’s life … at least for the next three to four months.

TE: You also talked about how you have helped a lot of people through being a stylist. Can you talk a little bit about the importance of African-American hair and how this has affected you on a personal level?

RD: Living in the Spokane and North Idaho area for 10 years, I have seen many mixed kids with white moms or adopted kids with white moms. African hair care is not only a very specific process that includes use of a particular type of hair products, but styling and maintaining neat, clean hair is a cultural and even spiritual experience. So, if I see a child who looks like they need some hair TLC, I will walk up to the mom and discreetly give her my card and offer to help. I also do hair for many adults, whether dreadlocks or braids or weave or extensions or maintenance.

One of the families I help out has three young girls and lives in Lewiston, Idaho. Their daughters were being teased at school for looking like boys and were developing such low self-esteem that they didn’t want to talk to anyone or look people in the eyes. They have really made a big change in the last year and are proud and even sassy about their looks. Seeing girls not just have general self-confidence in spite of how they look, but be truly happy because of their beauty as a black girl is really what my work as a stylist is all about.