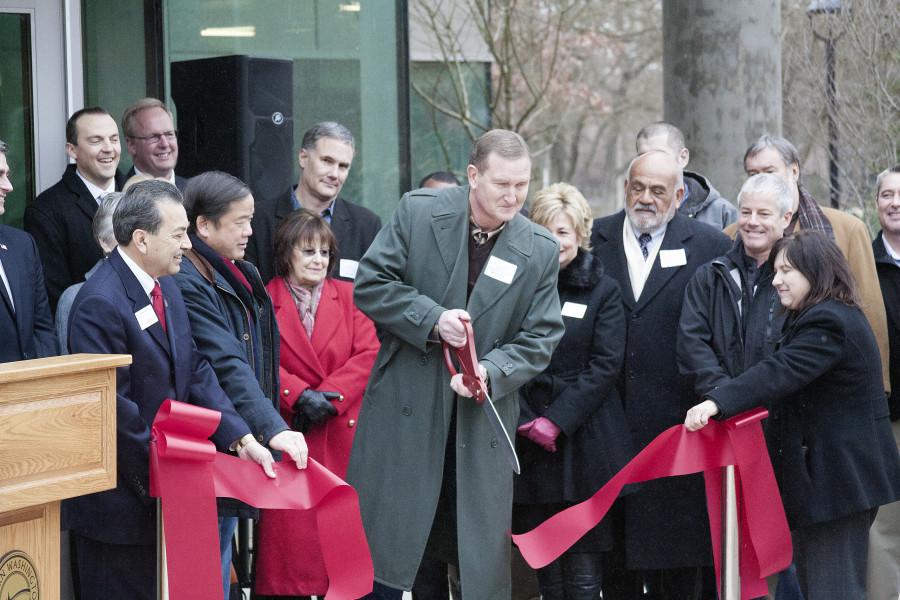 After four years, the newly renovated Patterson Hall is now open for winter quarter, and while students will enjoy a smoother walk across campus and substantial amenities in the new building, few will be rewarded more than the EWU faculty members who were displaced during construction.

Workers are still putting the final touches on the building, but faculty members from departments including English, philosophy, history and government were able to set up their new offices just before the quarter started.

Already, they are expressing their appreciation for the work done on the facility.

“It’s a beautiful building,” said Logan Greene, English department chair. “The people who have been in charge of the project have been really dedicated to making things the way we wanted … providing for our comfort and making sure everything works.”

She cited the problems with the old Patterson Hall, which included irregular heating, stained or crumbling walls, dim lighting and a poor building layout.

The improvements to the new hall will make the building stand out on campus. There is a hydration station on every floor, available to all, with filtered water. Electronic computer screens outside each classroom let students know if their class has been cancelled or if the room has been reserved. And the bathrooms feature high-speed hand dryers that people must experience for themselves to fully appreciate.

But faculty members are relieved to simply have an office to themselves.

While the building was under construction, many instructors were temporarily placed in cubicles in the Reid Lab building or in Cheney Hall. This made it easier for them to communicate with each other, but it often compromised their privacy. As Henderson pointed out, listening to music while grading papers was usually out of the question. More importantly, sensitive conversations with students wanting to speak privately could be heard by someone in the next cubicle.

According to Judith Logan, an English professor, movers came to haul books, computers and anything else away from their temporary offices and into Patterson on Dec. 17, while many instructors were finishing up their grading. The faculty had seen the new building in tours, but they did not have full access to the building until the week before the new quarter started. For most of winter break, many faculty members did not have an office.

Logan said many instructors had to put the majority of their books in storage when they moved out of the old building four years ago.

“I’ve had 28 boxes of books in a storeroom in Reid all this time,” she said. “So it will be like seeing old friends again when I open them in Patterson.”

The new building has 44 classrooms, 165 faculty offices and two computer labs, according to nacarchitecture.com.

Greene said the availability of Patterson makes scheduling classes much easier. The rooms are available for general use, and the extra computer classrooms could prove especially beneficial.

“The computer classrooms are stellar,” Logan said. “It should be a building we’ll all be proud of and worth the wait.”