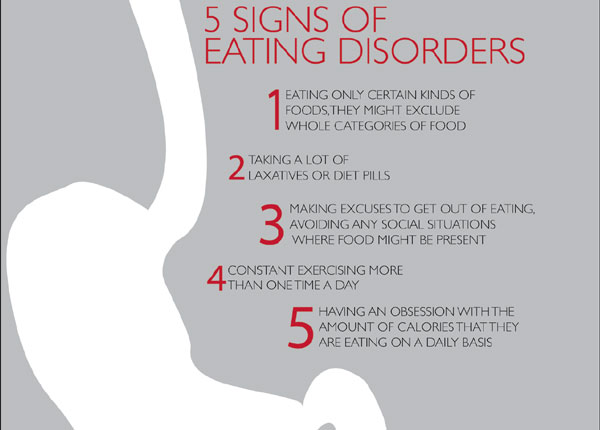 I just woke up, and yet I feel like my day is already spiraling downward. I feel so guilty for not working out yesterday. I am going to go to the gym for an extra hour today to balance it out.

Students at Eastern Washington University more than likely know someone on campus who experiences negative feelings toward themselves and their bodies, yet these feelings could lead to them having an eating disorder.

According to the National Institute of Mental Health, an eating disorder is an “illness that causes serious disturbances to [a person’s] everyday diet,” whether that be overeating or eating too little.

You will never be good enough. You do not deserve to eat dessert after dinner today because you have a double chin forming on your face. You are fat and ugly.

Melinda Ovnicek, psychological counselor and groups coordinator at Counseling and Psychological Services at EWU, said that many eating disorders begin with dieting and eating in a disordered way: counting calories, restricting food intake and not eating certain categories of food altogether, such as baked goods.

“Many eating disorders begin with disordered eating and dieting. This could include ‘good’ and ‘bad’ foods and intense emotions about food and weight,” said Ovnicek.

According to the National Eating Disorders Association, anorexia is the control of food by eating as little as possible and starvation. Binge-eating disorder is the act of eating an excessive amount of food at one time. Bulimia is a cycle of binge-eating and throwing up purposefully to purge.

You cannot eat that or else you will gain weight. Have a salad instead. When you get back to your dorm, you can eat all the food you want and purge. That way, you will stay skinny and no one will ever know.

Many communities, online and in person, are coming together to speak up about negative body image and stigmas behind weight.

Proud2Bme is an online community that has turned into a “global youth movement,” according to director Claire Mysko. She states that the goal of Proud2Bme is to “provide a safe space for young people to connect with others who get what they’re going through. Our community is dedicated to supporting eating disorder recovery and healthy body image.”

Many people do not necessarily fall under the category for having an eating disorder, yet that does not mean they should not reach out for help, according to Mysko.

“If your thoughts and behaviors related to food, weight, exercise and body image are negatively impacting your life, that’s enough of a sign to reach out for help,” says Mysko.

Why did I decide to go shopping with my friends today? I should have known better than to try on that small shirt when I knew it was not going to fit my muffin top. That just proves how fat I am.

With eating disorders affecting about 30 million adults in the U.S. alone, 43 percent of those affected reported having an eating disorder between the ages of 16 and 19, according to the National Association of Anorexia Nervosa and Associated Disorders. That percentage doubled by age 20. Eating disorders affect men and women of all ethnicities and age groups.

Tricia Hughes, director of Health, Wellness and Prevention Services at EWU, understands the different misconceptions about eating disorders that are incorporated into our everyday lives.

“[An] eating disorder that sticks in our mind the most is bulimia — eating a lot and throwing food up — or anorexia, when we picture in our minds that super skinny person who weighs 90 pounds,” said Hughes. “Oftentimes, students who have eating disorders are a normal weight. We may not know just by looking at someone whether they have an eating disorder or not.”

With the complexity of eating disorders, there are other illnesses that are not defined disorders, such as “drunkorexia.”

In the article, “‘Drunkorexia’ is a behavior that doesn’t work, health experts say” by Elise Oberliesen in the Los Angeles Times, she said that “the acceptance of excessive drinking on college campuses, combined with an obsession with thinness, may be to blame for a type of drinking and dieting behavior casually referred to as ‘drunkorexia,’ a condition in which people eat very few calories, if any, during the day and then drink — or even binge drink — later.”

Hughes claims it is an unhealthy trend forming on college campuses.

“One of the other [disorders] … that we’re seeing with young women on campus [is termed] ‘drunkorexia’ where they’re not eating in order to go out and drink their calories … in alcohol,” said Hughes. “For women, eating disorders are often tied in with body image. In our society, we’re fairly hard on women and body image.”

Do you know how many calories are in that drink your friend just bought you at the bar? Why would you drink that? You are so pathetic. Now you have to starve yourself to let your body get rid of those calories.

According to Mysko, women entering college whether as freshman or returning students are at a higher risk for unhealthy body image, as well as eating disorders because they experience a lot of stress and pressure.

“For many women, it’s their first time being away from their home environment and support systems. Women who already struggle with eating disorders before they start college need to be very proactive about their recovery,” said Mysko. “The disorder itself isn’t really about food and weight. It’s about much deeper and more complex issues, often linked to depression, anxiety, family issues, low self-esteem and perfectionism.”

About 10 percent of adult males are affected by an eating disorder, according to the National Eating Disorder Association.

One study by researcher Tom Shiltz, polled 226 college students concerning their weight, diets, body image and exercise, which resulted in 26 percent of the men and 48 percent of the women describing themselves as “overweight.”

“We’ve seen obesity and overweight rates increasing in our society … that’s affecting men as well as women. More men are really starting to get that unhealthy body image,” said Hughes. “Eating disorders are very stigmatized for women. … But I think that just shows how much more hidden it is for men.”

I cannot talk to anyone about what I am going through. No one cares about me, and why should they? I am a horrible person who hides in his room and eats his feelings.

According to the National Eating Disorder Association, eating disorders are seen on athletic teams, as well as in individualized sports, such as swimming, gymnastics and wrestling. Athletes experience an immense amount of stress with balancing their sport and studying. This makes them more vulnerable to mental health problems.

“Some sports emphasize thinness and some athletes believe that they will perform better in their sport if they have a certain weight,” said Ovnicek. “These types of pressures can contribute to unhealthy attitudes and habits around diet and exercise.”

In a study of Division I NCAA athletes, over one-third of female athletes reported symptoms placing them at risk for anorexia nervosa. Research confirms that anorexia has the highest mortality rate of any psychiatric disorder, according to the National Association of Anorexia Nervosa and Associated Disorders.

You are so fat. You cannot expect to run on the cross-country team unless you lose 20 pounds to become faster. You are letting your coach and your teammates down. They are fat-shaming you for a reason.

“A lot of times, eating disorders come down to a control issue. When life builds up, … we have stress from our school work and figuring out how we fit in with our peers and being a Division I athlete. It just puts that extra level of stress on us,” said Hughes. “It’s about control. I’m able to control what I put into my mouth and how I eat and how I look. There might just be an extra level of stress sometimes on our student athletes.”

Spencer Tucker, a returning student to EWU, was on the wrestling and football teams at Bethel High School in Spanaway, Wash. He was also a part of Eastern’s Rugby team in 2010.

He recalls teammates on the wrestling team who took their weight very seriously compared to others.

“[Some wrestlers] seem like it’s a life or death situation, like they have to win. Winning is their only option,” says Tucker. “You see people … on weigh-ins dangerously trying to cut weight. … I’ve seen people to the point of exhaustion, dehydrated from running around.”

Tucker said his teamates summed it up to dedication, but he had to wonder when it was too much? There was an instance when one of his teammates who attempted to go to a lower weight class before weigh-in by trying to lose a few pounds in a short duration of time.

“They had him lying in the coaches office wrapped in blankets just from exhaustion. I think he did wrestle that night too,” says Tucker.

I keep getting hate mail on my blog about my pictures and how fat I look. I feel so depressed because I feel these people sending the messages are right. Why do I even bother?

Social networking is also contributing to the obsession many young men and women have on being thin. Pro-anorexia and “thinspiration” blogs are on the rise on sites like Tumblr, Twitter and Facebook.

In the article, “Recovering from an Eating Disorder in College: a Survival Guide,” by Annie Stewart, a senior in college on Proud2Bme, Stewart remembers her past college years and her hardships with eating disorders during that time.

“One of the most beneficial aspects of my recovery are the ‘skills’ I learned in treatment. The eating disordered thoughts did not disappear once I returned from inpatient treatment. Therefore, I had to replace my ED thoughts with positive, realistic thoughts,” says Stewart.

“ED” is a common abbreviation and figurative name used by many patients, as well as therapists that are a part of eating disorder recovery.

Stewart ponders about the incoming freshman at her university.

There are a variety of resources at EWU for students wanting to get help or are concerned about a friend.

Mysko said that the first step is to reach out.

“Talk to someone you trust and take a step to get professional help. Eating disorders are not the kind of problems that just go away on their own, so it’s important to seek treatment,” says Mysko.

According to Ovnicek, Counseling and Psychological Services offers a variety of free resources and self-help guides at its office located on the second floor of Martin Hall. It offers walk-in hours from 1 to 4 p.m. on weekdays. Ovnicek encourages individuals to come into CAPS to talk with a counselor if they feel they, or someone they know, might be suffering with an eating disorder or disordered eating. They also offer assessments and referrals to help students take the first steps in treating an eating disorder.

Hughes said that Health, Wellness and Prevention Services do a lot of the prevention side of eating disorders. This includes creating programs around healthy lifestyle choices, eating, exercise and body image. Any group or organization on campus can contact prevention services to have a peer health advisor come and talk to them.

As for Stewart, she created a support group on her college campus to help those who have an eating disorder or disordered eating habits. She said that she does find herself wanting to resort to her old habits sometimes, yet with support and therapy, she is able to surpass those habits with better ones.

“When life feels out of control, I have been tempted to resort to old patterns. However, this is not the end of the story,” said Stewart. “You can, and you will fight these thoughts and live a life free of ED. This takes hard work, perseverance and patience.

“There is hope, there is healing and there is life free from ED. The road is never easy, but it is worth it.”