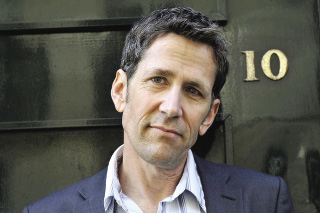 Jess Walter, an EWU graduate, is currently co-writing a film script based on his New York Times bestselling book, “Beautiful Ruins,” according to Walter.

His script writing partner is director and producer Todd Field, who has won a Golden Globe and several other industry awards for his work in film, according to the film industry website Collider.com.

“Beautiful Ruins,” with settings from 1962 to the present, has several story threads. The main thread tying the book together follows a man and a woman who meet by chance in a tiny Italian coastal town that can only be reached by boat because there are no roads to it. Choice and circumstance separate them completely until 50 years later.

Although the theme is romantic in that it involves this man and woman, the book is not a romance novel, following the storylines of a drug-addicted son, a self-absorbed Hollywood producer and a young actress who has learned mid-filming that she is dying.

According to an author interview in Pillars, EWU’s alumni newsletter, Walter graduated with a bachelor’s degree in journalism in 1987 and worked at the Spokesman-Review.

Walter’s website says that he wrote his first book in 1996. Titled “Every Knee Shall Bow” and now called “Ruby Ridge,” the nonfiction book was about the fatal 1992 Ruby Ridge confrontation between Randy Weaver and his group on one side and FBI and ATF agents on the other.

He has written six books since then, including “Beautiful Ruins.” His 2005 book “Citizen Vince” won the Edgar Allan Poe Award for best novel, and his 2009 book “The Financial Lives of Poets” was named the No. 2 novel of the year by Time magazine.

“Beautiful Ruins” has reached No. 1 on the New York Times paperback fiction bestseller list — just ahead of “Fifty Shades of Grey.”

The book’s title came from a New Yorker article by Louis Menand calling then-54-year-old Richard Burton a “beautiful ruin.” “When you come across a phrase that perfectly describes what you’re writing, you use it,” Walter said.

Walter said that he and his wife took a trip to the Italian coast in 1997, where this book is set, and that was the genesis of some of the characters in “Beautiful Ruins.” He wrote five other books while this one was percolating in his mind.

He said he had actually finished two drafts of “Beautiful Ruins” during that time: “It’s a pattern of writing and rewriting that is so much of writing fiction.”

Walter is working on several new projects. A book of his short stories was released in February of this year, and he has a short story coming out in Esquire magazine in June. “I’m working on the next novel, but that’s probably a couple of years away,” Walter said.

In the Spokane area, Walter supports reading and literacy efforts as well as literary programs such as Eastern’s Get Lit festival, in which he participates every year.

“He’s always been very supportive of Get Lit. He’s always been willing to talk up the program and encourage others to participate,” said Melissa Huggins, Get Lit coordinator. “Usually he’ll give a reading and sign books. Often we pair authors with each other, so he has helped Get Lit bring in authors that he is friends with, like Richard Russo a couple of years ago.”

Get Lit started a new series called Pie and Whiskey in 2012. At the 2013 Pie and Whiskey reading, Walter and fellow Spokane writer Shawn Vestal did readings and then had a conversation up front moderated by Samuel Ligon, EWU assistant professor of English and creative writing.

“He is incredibly witty and down-to-earth and has a great sense of humor, and we feel very grateful to have him participate in the festival every year,” Huggins said.

The “Beautiful Ruins” project does not have a publicized date of completion yet.