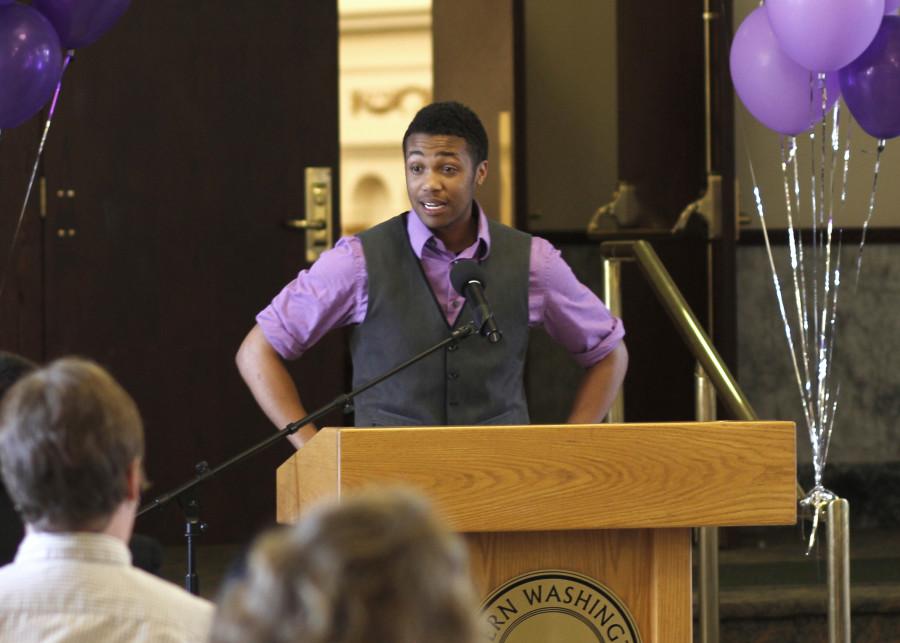 Keynote Speaker Kye Allums believes gender is a feeling, and you cannot determine how others will view you.

EWU honored soon-to-be college and high school graduates at the fourth annual Lavender Graduation on May 9 in the Showalter Rotunda.

The event is a cultural celebration held every year at colleges and universities across the country to commemorate the academic and personal achievements of lesbian, gay, bisexual, transgender, questioning and ally students graduating in June.

Dean of Students Amy Johnson welcomed students and their families.

“No one breaks ground or affects change without standing on the shoulders of someone who came before and helped pave the way,” said Johnson. “As you mark your own significant, personal achievements, I hope you take time to recognize those who have laid a foundation for you, … and I hope you continue to blaze and solidify a trail, which others may follow.”

“These are some special people that are [being] acknowledged for what they’ve done in the lives of these folks that are graduating,” Williams said.

Graduate student Deanna Carroll presented an award to her mother as a thank you for her support. Sue Lecoe had frantically called Williams the day before asking that her daughter be able to participate in the graduation ceremony.

‘My daughter is an ally and it’s something she’s looked forward to all year. … She earned it,” said Lecoe.

Graduate Kurt Hayley Coffey from Lewis and Clark High School and EWU graduates Lucia Vazquez and Darrel Greene spoke and shared their life experiences relating to being a part of the LGBTQ community.

The keynote speaker was Kye Allums, a 2012 graduate of George Washington University who made history as a student by becoming the first openly transgender athlete on a division I women’s basketball team.

Allums told his story about his family struggles being raised as a girl in Minnesota, his transition to a gay high school student and then to a transgender male student in college.

“Gender is like music. There is no explanation, I just feel it. When someone says, ‘OK Kye, you’re a girl, I’m going to say, ‘she and her’ that’s my bad song. That’s my Justin Beiber. I don’t want to hear it,” said Allums, “When you call me a man, that makes sense. That’s my Beyonce.”

Now dedicated to empowering and educating the world about transgender issues, Allums has started a project called “IMEnough,” where people can record their voices and share stories.

“Your voice matters. If I would have had an experience that I could listen to about stuff that I was going through, it would have made all the difference. That’s why I do what I do,” said Allums.

The evening’s entertainment was provided by Beth Mies’ stand up comedy. Eagle pride member Joshua Neil read the poem “I want to know what it’s like” by Ryan James Yezak, and two musical performances were given by Douglas Emerson and Hannah Maki.

Fifteen students received lavender stoles, and an honorary stole was given to Allums. Pastor Happy Watkins closed the ceremony.