Greek Week is ‘All That’ and a bag of chips 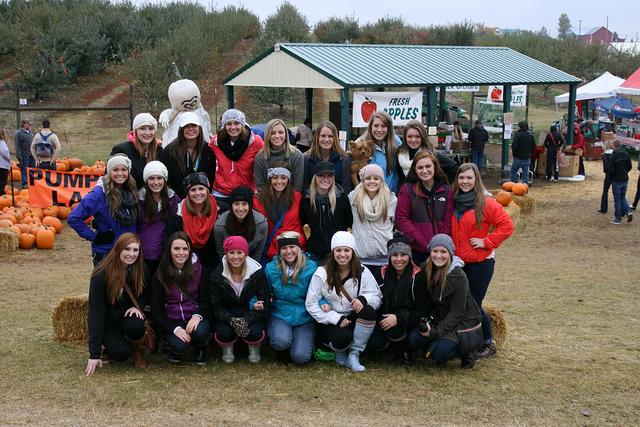 
In the printed version of this article, Michael Rutledge’s name was spelled incorrectly.

Marissa Sturm stands on stage with her Alpha Phi sisters as the lights go down and the group’s lip sync begins.
Sturm will be one of several members of EWU’s Greek Community who will participate in EWU’s annual Greek Week, May 15 to 21.

Similar to last year’s Greek Week, fraternity and sorority members will participate in events on campus.

According to Samantha Armstrong, the adviser for leadership education, students, faculty and staff are welcome to come watch the events. Fraternities and sororities will also be participating in community service projects throughout the week.

In the previous year, the Greek community raised $3,000 to support underprivileged youth to get free swimming passes for the summer.

In addition to the money raised, fraternities and sororities also raised over 3,000 pounds of canned food for the Cheney Food Bank by building structures out of canned food. Last year’s theme was Marvel’s “The Avengers.” This year’s theme will revolve around the 1990s and TV shows that have aired on Nickelodeon.

Michael Rutledge, director for the Interfraternities Council, said the goal is to surpass the amount of food and money that was collected from last year.

“One of the goals is to raise over $6,000 for a local Cheney girl named Sierra,” Rutledge said. “She has bone cancer and a brain tumor. We’re working in correlation with Brewster Hall and their [community adviser] Richard Arquette. He came to us, … and we’re working together to raise funds for her, just to help the cost of treatment.”

In an effort to gain more involvement from the Greek Community, fraternity and sorority members had the opportunity to apply for Greek Week Co-Chair and Planning Committee positions. According to the EWU website, committee members will not compete in the events they are assigned to be in charge of.

A change Sturm has noticed from last year’s Greek Week to this year’s event is more emphasis on bringing everyone together.

“I like the change to a more lighthearted celebration, instead of a [focus on] competition,” Sturm said.
One of the other changes to this year’s Greek Week include an opening ceremony at Roos Field, which takes place after Greek Community members walk from the pillars to the field. There will also be a social justice speaker coming to the event to talk about human trafficking in the JFK Library, April 16.

“We built that in as an educational component for Greek Week,” Armstrong said. “Part of being in a fraternity or a sorority is engaging in issues of education and social justice and trying to make out how you can make a difference.”

One of the ways money is raised during Greek Week is the annual Lip Sync, May 21. Fraternities and sororities perform a song and dance routine. According to Rutledge, admission for audience members, as well as anyone participating in the Lip Sync, will cost $5.

“We’re going to advertise a lot more [before the event],” Rutledge said. “Upon entrance we will be encouraging community members to donate more than the $5. Whatever they see that they can afford.

Although Greek Week is mainly celebrated by the fraternities and sororities, Armstrong said that the event would not be possible without the “amazing partnership of this campus.”
“This [event] not only highlights what Greek life can do, how fun it can be and what difference fraternity and sorority students can make, but also engages the rest of the campus,” Armstrong said.

May 15
Greek Pillar Walk at the pillars, at 4 p.m.
Greek Week Opening Ceremony and Field Day from 5 to 7 p.m.

May 20
LipSync Practice (chapters will receive notification of scheduled time)
Men’s 3-on-3 Basketball at Reese Court from 6 to 9 p.m.

May 21
LipSync at Showalter Auditorium at 7 p.m.