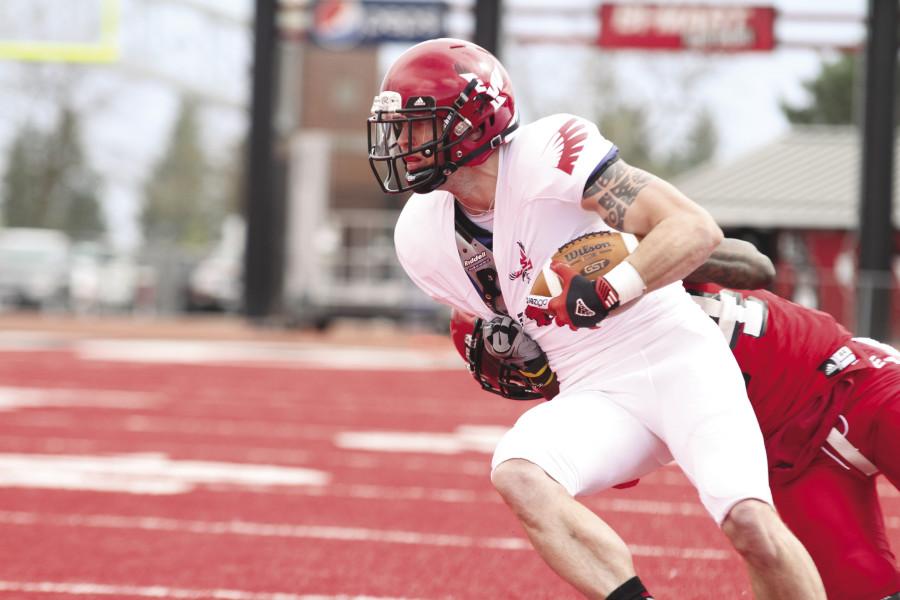 Wide receiver Cory Mitchell wrestles away from defensive back Ronald Baines during the spring game. Photo by Aaron Malmoe

The hard work is starting to pay dividends for the Eagles’ offensive skill-position players.

EWU’s offense ran at a smooth pace during the Red-White spring game, totaling 361 yards on 76 plays and scoring five touchdowns. Quarterbacks Vernon Adams and Jordan West each threw for two scores, while fellow signal caller Anthony Vitto ran one in on an 8-yard scamper.

Playing in his first game action since November 2011, redshirt freshman wide receiver Cooper Kupp racked up 119 yards on eight catches, along with two touchdowns — one from Adams and one from West. “We’re putting in extra work,” Kupp said. “All the quarterbacks and receivers get together, and we know that we need to be on our game all the time.

“Two Novembers ago was my last game, and that game didn’t end up so well. It was definitely nice to be able to come out and compete with this new team and new guys that are my family for the next four or five years,” Kupp said.

Entering his sixth season as the Eagles head football coach, Beau Baldwin was pleased with the strides the offense has made since the beginning of spring practices on April 4. “They’re starting to think less and just get it and know, and then you’re able to play faster,” he said.

Baldwin’s offense, clad in white jerseys, ran a variety of plays out of the pistol formation, a different look from last season. In the pistol, the quarterback lines up approximately four yards behind the center — as opposed to seven yards in the shotgun — with the running back directly behind. Speaking to the pistol’s advantages, Baldwin said, “The defense can’t set a front based on where the back is, yet you still involve the [quarterback] in the running game. It’s fun stuff.”

The White got the scoring started at the end of the first quarter when Adams found wide receiver Cory Mitchell in the left corner of the endzone for a 22-yard score. The scrimmage technically consisted of four quarters of football, but no clock was kept nor score recorded. Adams threw up a 50-50 ball, and Mitchell, a redshirt junior, out-jumped cornerback T.J. Lee III to haul in the impressive catch. “Vernon [Adams] did a good job testing me,” said Lee, a redshirt senior. “We always talk about it and argue. He threw a go-get-it ball — a 50-50 ball — and the offense happened to pull it down.”

The defense, wearing red jerseys, shut down the White [team’s] running game, limiting ballcarriers to a 3.0 yard per carry average on 35 attempts. Junior running back Quincy Forte got the bulk of the carries and made the most of it, rushing for 49 yards on 10 touches.

Baldwin added: “When there’s plays being made, I can live with that and move on to the next snap. What I want to cut down on again is still just some of the sloppy unforced errors.”

The Eagles’ spring training culminates with their final practice on May 2. “We probably won’t add a bunch in the last three days,” Baldwin said. “But we just want to get sharper at what we’re doing.”