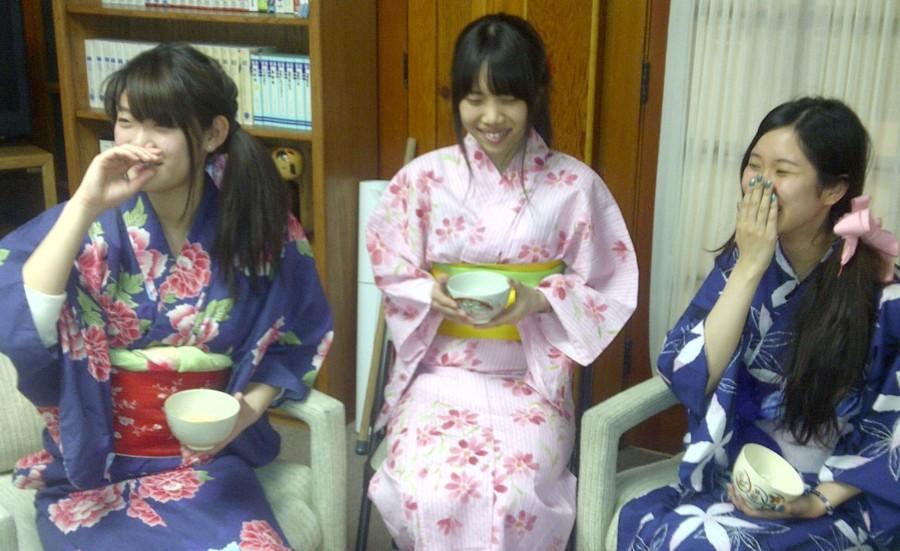 Photo by Haley Lewis Mukogawa Fort Wright Institute students Mayuka Hanawa, Serina Kume and Mizuki Mori reminisce about the fun they had at the summer festival while wearing yukatas. Every summer, Japan has summer festivals and women wear yukatas to celebrate.

With Japan Week underway and continuing through the end of the month, EWU students who participate may have noticed several people wearing kimonos.

According to the Victoria and Albert museum website, the term kimono means “the thing worn.” A kimono is a simple T-shape, straight-seamed garment. Kimonos were originally worn by commoners or as an undergarment by the aristocracy. Since the 16th century on, the kimono became the main item of dress for all classes and sexes.

In the 1850s when the United States arrived on the coast of Japan to open up its port, western influence started to take an effect on fashion. Some members of the elite adopted western dress to become modernized. Men started wearing business suits but at home they wore the kimono. Women continued to wear the kimono since they were mostly at home and not in the workforce.

In the 1920s and well into the ‘50s, the kimono was still worn, but the motifs changed to reflect rising popular art styles like art nouveau and art deco. By the end of World War II, western-style clothing has become the predominant style for most Japanese.

Yoshiko Murahata, director of the japanese cultural center at Mukogawa Fort Wright Institute in Spokane, which is a university for Japanese students, said the history of the kimono is complicated.

“In the 12th or 13th century in France, people in different ranks used to wear different type of clothes,” said Murahata. “The upper class wore nice gorgeous dresses with lots of accessories. The lower rank wore simpler plain farmers clothes. It was the same in Japan. The high rank wore gorgeous kimonos. The lower citizens wore simpler cotton [pieces]. 1,000 years ago, we can see the social rank by judging the kimono. These days it is not like that.”

Murahata said today it is rare for people to wear the kimono.

“They are only worn to celebrate very important occasions: to mark the coming of age, a wedding ceremony or a funeral,” said Murahata.

Ages 3, 5, 7 and 20 are celebrated as different coming of age moments. 20 years old is considered an adult in Japan. Murahata said they are sometimes worn for tea ceremonies and sometimes worn during New Year’s Day to pay first visit to the shrines or temples.

Murahata said kimonos are very expensive since they are handmade out of silk and hard to wear. Because they are not used very much and also because of the price, people rent them sometimes.

Murahata said people choose colorful kimonos for happy occasions and plain colors for very formal tea ceremonies. For funerals, all black is worn. When going to a party, Murahata said she wears a very colorful kimono with beautiful pictures or embroidered flowers on it.

Kimonos can be adaptable to the weather. A summer kimono is very light, a winter one has a lining and an in-between kimono has no lining. Kimonos can also symbolize relationship status. If a women is not married, the sleeves will be longer and almost touch the ground.

Mukogawa student Serina Kuma said the kimono is to be folded left over right for living people and right over left if the person is deceased. She said the sash that holds the kimono together and tied as a bow in back is called the obi.

Murahata said there is another similar kimono with shorter sleeves called a yukata. It is more casual and worn during the summer festivals. It is made out of cotton, more affordable and more practical. She said women in Japan wear the yukata to feel cheerful, lively, fun and to keep with the traditional roots.

Kuma said she likes to wear the yukata because she feels Japanese in it.

“I feel exotic when wearing it,” said Kuma.