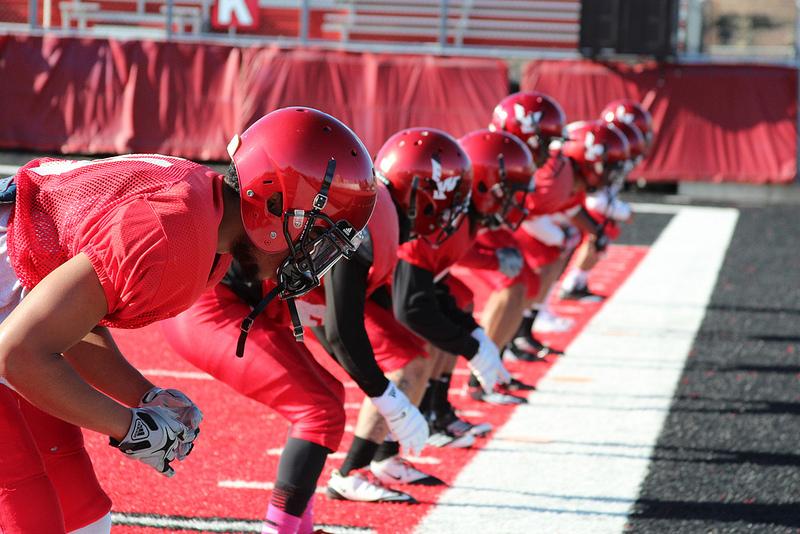 Photo by: Josh Friesen Cornerbacks and safeties prepare in athletic stances to begin a drill during practice.

Coach Baldwin sees improvement on both sides of the ball

Defense usually progresses quicker than offense when the pads come on, and the same is holding true for the Eagles as they prepare for the Red-White spring game on April 27.

Through nine practices, players and coaches agree the defense has a leg up on the offense. Quarterback Vernon Adams is tired of it. “I really want to beat them,” he said. “I kind of get upset with myself, and they get in my head by talking mess to me, but I just hope we get it together. I know we will.”

In the Eagles’ scrimmage on April 20, the defense combined for three interceptions, three sacks and seven passes broken up They also held the offense to a paltry 3.7 yards per play.

Coach Beau Baldwin does not worry himself with winners and losers at this stage of spring practices. Rather, he would like to see overall improvement. “I don’t really get caught up in who’s behind who. I just want to see progress,” he said. “What usually happens [is] defense is a little bit ahead of an offense at this point.”

One player back on the field practicing is cornerback T.J. Lee III, an All-American in 2012 who had been sidelined with multiple injuries. He likes what he sees. “I’ve been watching as much as I can, and it looks like the defense is very strong. We’re not suffering, we’re not weak in any areas. We’re very enthusiastic and very loud. We’re flying around out there, and that’s exciting to watch.”

Lee said the extra time spent on the sidelines has helped him make a full recovery from a back injury sustained versus Sam Houston State on Dec. 15 and a knee injury from a car crash on Christmas Break. “I just took my time recovering. Now I feel really good — better than ever,” he said.

In addition to the Red-White spring game on April 27, Baldwin will have a keen eye on rounds 3-7 of the 2013 NFL Draft, where multiple former Eagles have a chance to hear their names called. “It’s an awesome day, and it’s fun,” he said. “It’ll be the third year in a row where we’ve kind of had that day include the spring game and the possibility of someone being drafted.

The possibilities this year include “The Big Three” receivers — Brandon Kaufman, Greg Herd, Nicholas Edwards — quarterback Kyle Padron, pass rusher Jerry Ceja, offensive lineman Will Post and linebacker Nick Johnson. “I think every guy right now who thinks they have a good shot of getting drafted, worst case scenario, they’re going to get a shot with that team — every one of those guys, and deservedly so,” Baldwin said. “I’m excited to see where they land, whether it’s as a drafted player or as a priority free agent.

New Eagle defensive back Tevin McDonald, the recent transfer from UCLA, will be following the draft intently to see his brother, T.J. McDonald, get his name called. T.J. McDonald played safety down the road from Tevin McDonald at USC, and his success has motivated Tevin McDonald to keep himself on the straight and narrow. “I’ve been working toward the same thing my whole life,” Tevin McDonald said. “That’s the ultimate goal: to get a chance to play at the highest level.

Tevin McDonald said getting back to practice is a tremendous release for him. “It’s my sanctuary here,” he said. “You get two hours where everything else just goes away, and I get to play ball. This is my favorite time of the day.”

Another football-related event on April 27 is the annual Killin dinner, dance and auction, which takes place after the Red-White game. Now in year No. 32 of existence, proceeds from the Killin dinner “benefit areas of greatest need within Eastern Athletics,” according to the EWU athletics website. It is named after Orland B. Killin, a former Eagles football letter winner, professor, faculty athletic representative and faculty president.