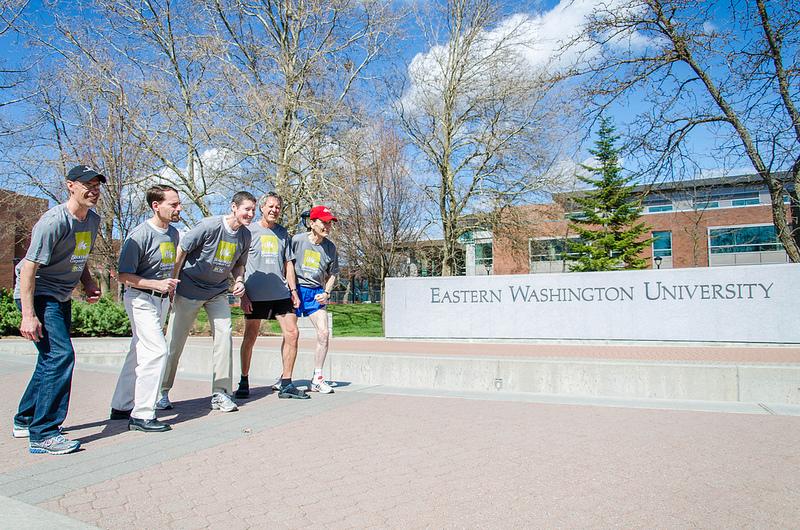 Eastern employees have won the Bloomsday Corporate Cup for the past 15 years, but new rule changes this year could give them a run for their money.

Bloomsday, a 7.46 mile race around downtown Spokane, is held on the first Sunday in May. It was first held in 1977. English professor Grant Smith participated in the inaugural Bloomsday, and he has raced in each one since then.

“If we had been entering, we could have gotten a lot more points [than the winners], but no one knew about the corporate cup competition,” Smith said. “I said I would fill out the paperwork next year, and we would run as a team. We smashed all the records in [1983].”

Smith and chemistry professor Jeff Corkill are two of the members of that original team.

“[Corkill] is our best runner by far. Although he’s missed a couple of Bloomsdays and he’s collapsed of heat stroke twice, so I’ve scored the most points,” Smith said.

Points are earned based upon a runner’s place in their respective age group. First place earns 1000 points. Only the top three fastest runners on a team are scored. EWU scored a perfect 3000 points in 2004, setting a Corporate Cup record. They also set a record for lowest total time in 1997, clocking in at 2 hours, 3 minutes and 14 seconds.

“Part of the reason I think we’ve done well is that you’re only running against the people in your own age group. This year they’ve changed the scoring system just so they can stop us from winning, I think,” Corkill said.

This year, runners will be scored only with the other Corporate Cup competitors, rather than with all of the Bloomsday runners. This could give younger competitors an advantage because few runners participate in the 20 year old age range at the Corporate Cup level, but many enter the race as a whole.

One of the most difficult parts for the team so far has been securing a spot in the competition. Only a limited number of teams can participate in the Corporate Cup, so EWU had to scramble to ensure their place.

“In the past, it has filled up in a few days. Last year it took 16 hours. Within 43 minutes, it closed [this year],” said IT specialist Carl Coombs.

Two years ago both Coombs and Corkill won their divisions. Coombs ran the course in exactly 41 minutes, and Corkill finished in 50 minutes and 59 seconds.

Although Coombs enjoys racing, his favorite part of Bloomsday is the Corporate Cup tent.

“The thing I like most is the Corporate Cup tent. After the race, Corporate Cup finishers can go and get free coffee, free drinks and free massages,” he said. “They take your gear at the start of the race and pack it in these big trucks, so they have your number and your bag at the end. You feel like you’re important.”

Smith views Bloomsday as a celebration of wellness and encourages everyone at any level to sign up and compete. The cost to participate is $17 before April 21 and $35 after. Interested participants can go to www.bloomsdayrun.org to sign up and get more information.