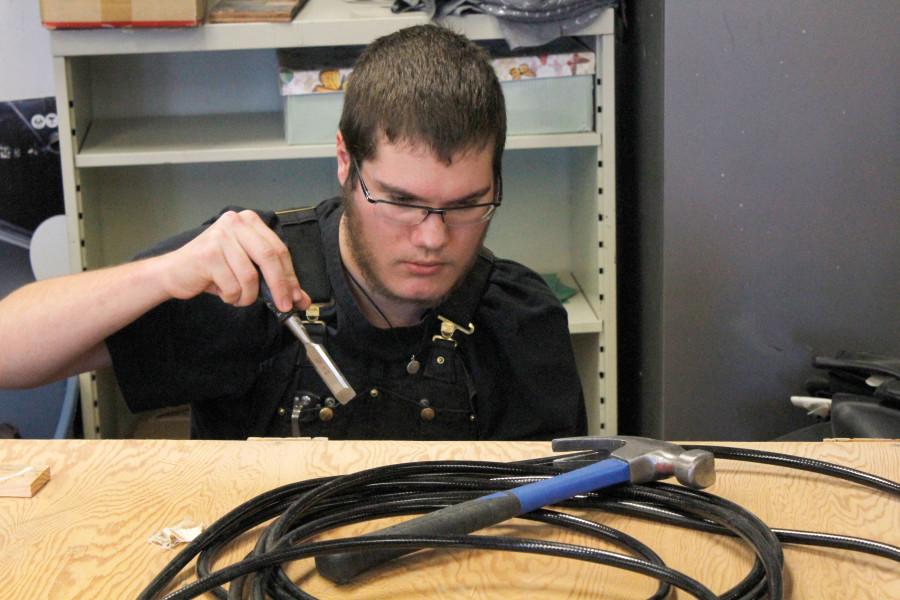 As “Build Me Up Buttercup” by The Foundations blasts through the theater building, the stage crew works without end on constructing the set in preparation for the upcoming Eastern production of “Ode.”

The smell of wood and paint is heavy in the air as theater students drill together large pieces of wood that will become part of the stage. Yet this is just the beginning of their long day of work.

“We build from 2 to 5 [p.m.] every day,” said EWU Technical Director Shana Joslyn. “Then, when we get into the tech schedule, most of the time I’m usually here until 1 or 2 in the morning. Sometimes I’ll get here at 5 in the morning to start my day.”

In her third year at Eastern, Joslyn is in charge of a dozen students who work on the set design, lighting, construction, sound and other aspects of Eastern’s theatrical productions.

“I love working with students because I learn from them and they learn from me,” said Joslyn. “I like seeing the growth of the students, and starting from being really scared and intimidated into using the tools and having no artistic creativity. By the end of the quarter, they’re doing gorgeous scene painting techniques.”

One of these students is lead technician Teko Dumoulin, who began working with the Eastern theater department when he was in sixth grade.

“My life is the theater,” said Dumoulin. “I spend all of my time here if I can. If I’m not working in the theater, I’m working with Inter-Players, building scenery for them. I feel that my work is everything to me.”

During his winter vacation, Dumoulin volunteered at a local Spokane theater to help them with anything they needed. Dumoulin aims to be a technical director when he graduates and work in either Seattle or San Francisco.

“That’s part of what it is to be in theater,” said Dumoulin. “You have to live it. How many people get paid to do what they love to do? This is what I chose to do when I was twelve. Here I am making money for it and going to school for it. It’s fantastic.”

Rebecca Spining, a theater major, has done a bit of everything, including stage management, directing, electronics and acting. She is the lead sound designer for “Ode.”

“Everything else in the world is boring by comparison,” said Spining. “I love theater because it encompasses every aspect of life. Any skill that you have can be used in theater in order to facilitate the telling of the story.”

Dumoulin and Spining were both inspired by the work of former EWU technical director Don McLaughlin for his overwhelming passion for theater as an art form.

One of the problems of technical theater is that the people operating the spotlight are hidden away while the audience focuses on the actors. Dumoulin believes this is often more satisfying than acting, because when the audience notices the technicians did a good job, they are not sure who to praise.

“They have no idea that they are complimenting you,” said Dumoulin. “That’s a great feeling, when you can be hidden in the shadows but listen to people on how they respond to your work.”

The relationship between the actors and technical crew is often a boiling point, but rarely at Eastern. Theater students must participate in both the technical aspects and acting to graduate.

“We have a really good community because that relationship is blurred,” said Spining. “We realize that each element is vital to the play.”

Dumoulin believes that technical theater is an art form and that this is forgotten by most people.

“It gets lost in that, and I think that’s what is so beautiful about technical theater,” said Dumoulin.  “It’s the meeting of art and engineering, unlike anything else in the world.”