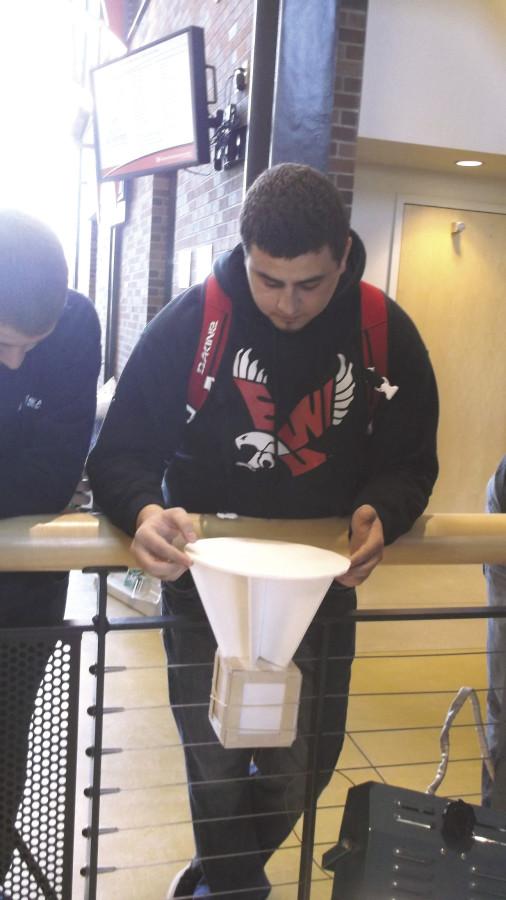 Student drops egg entry from the first floor of the Computer Engineering Building to the lower level.

The annual EWU egg drop competition, held on Feb. 15, has turned the entertaining pastime of dropping a raw egg off a balcony into a science.

The competition, sponsored by the American Society of Mechanical Engineers student club at Eastern, is open to all students.

Club officers Frederick, Cody Engelke and Mitch Youngs ran the contest efficiently, handing out the club-provided eggs, announcing each contestant in turn and dropping eggs for people who had indicated they would not be there to drop their own entries.

Engelke stationed himself in the lower level next to the clear plastic drop mat, ready to examine dropped eggs and shout “Clear” when he was ready for the next drop.

Ken Prothero, a senior in mechanical engineering technology, recited this year’s rules: The egg container had to be less than 1 foot by 1 foot; it had to weigh less than a pound; entrants had to be able to open the container, recover the egg and then close it up again; and no memory foam, glass, liquid, lighter-than-air gases or flammables could be used.

“Last year we had one that had some memory foam in it, ” Prothero said. “It was indestructible.”

Engelke, a senior mechanical engineering major, said, “Over the years, the designs of the projects have become very advanced, so we try to adjust the rules every single year to try to compensate for that.”

Engelke said that any eggs that survive the drops—and they have dropped an egg out of a high residence hall window and had it survive—are finally subjected to a baseball bat. Club officers are not allowed to win, but several entered this year just for fun.

This was Abby Damerow’s first year participating. The sophomore computer science major heard about the contest the same morning it was to be held and put together a last-minute entry made with a partially empty peanut butter jar and other wrappings. It broke this year, but she says she might participate again next year.

“Maybe with a fuller peanut butter jar,” she said. “If I’d had more time, I would’ve put together something better.”

Senior mechanical engineering major Joshua Stebbins constructed an entry made with straws to cushion the impact, a large hollow plastic Easter egg and a lot of additional padding. His egg survived the first round but broke soon afterward.

“The top is modeled after a badminton birdie,” he said. “Its skirt kind of keeps the heavy end dropping first … What let it down was the fact that I didn’t account for a large enough egg. I thought it was going to be one of those smaller eggs, but it turned out to be a jumbo egg. So my foam wasn’t cut out enough inside.”

In the end, several entries survived being dropped from the highest floor of the CEB to the lower level. The last remaining entrants took their eggs outside. Someone handed a baseball bat to Jason Durfee, associate professor of mechanical engineering, and he went after the last few eggs with enthusiasm.

Onlookers and contestants teased Durfee for not swinging hard enough when three of the entries survived the baseball bat treatment.

Scull and Martinez each received a bag of prizes, including a Swoop bobblehead and an American Society of Mechanical Engineers LED keychain, and then the winners put their egg containers on the ground and started passing the bat around to give everyone a chance to destroy the winning entries.