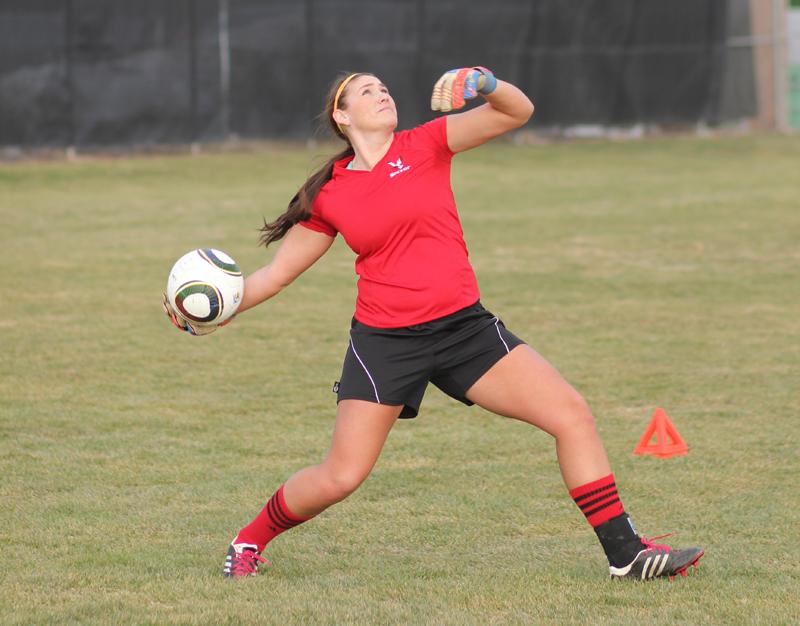 EWU goalkeeper Jamie Walker is throwing caution to the wind and taking a path seldom traveled by collegiate student athletes.

Walker will participate in the inaugural Peak Performance Soccer Women’s Soccer Combine from Feb. 22 to the 24 in Sunrise, Fla.—an attempt to impress an audience of professional coaches and scouts enough for one of them to sign her and fulfill her lifelong goal of playing professional soccer. “It’s my passion, and I’m not ready to give it up yet,” Walker said.

In addition to the combine in Florida, Walker also plans on trying out for the Seattle Sounders Women team on March 15. In June, she will travel to Brisbane, Australia, and train with footballers from the Diamond League for three months. “If all goes well and I do well there, then I get an extended contract for 12 months,” Walker said. “I got some options, so it’s nice.”

EWU goalkeepers coach Tamara Hageage recruited Walker to Eastern and nominated her to be invited to the combine. She believes Walker has the ability to play professional soccer. “I’m hoping that my foot was big enough to get her in the door, and I think if they really look at her and give her an opportunity, I know she has what it takes to play at that level,” Hageage said.

According to the combine’s website, space is limited to just 144 invitees. Each player gets the opportunity to participate in physical testing, practice in training periods and play full matches. Goalkeepers will receive training specific to their craft. “I want them to see my technical ability, my voice and just [me] being a big presence in the goal and dominating it,” Walker said. “Once you get to the professional level, it’s all about fear. It’s all about making the other team be scared of you.”

Walker, a senior from Graham, Wash., played in 12 games for an 18-game season for the Eagles in the 2012 season, starting 11. The other seven games were started by sophomore Nathalie Schwery, a highly touted recruit from Switzerland and the first national team member ever to sign with EWU. “[Walker] handled it with a lot of grace and maturity because she’s a really good person,” Hageage said. “She cares so much and she works so hard. Any player that all of a sudden is put in a position where they’re not starting and they have to share that they think they earned—that’s a hard pill to swallow.”

Walker said the experience was difficult at first but provided her with some much-needed perspective. “It was hard going from playing every game, all game, to having to split time, but Nathalie stepped in, stepped up and helped a lot,” she said. “[It] actually helped me in a lot of ways because I could sit back and kind of observe more—a passing of the torch type of deal.

“It wasn’t the most ideal situation. It wasn’t exactly how I thought my senior year would go but I don’t have any regrets. When I did get to play, I played as hard as I could.”

“[Walker] epitomizes what we want for Division I athletics at Eastern, or any team for that matter,” Hageage said. “She won our highest award—the golden eagle—this year.”

One of the coaches Walker will be looking to impress at the combine is Scott Vallow, goalkeepers coach of the Western New York Flash, a professional soccer club that competes in the National Women’s Soccer League. “Players that we identify that can make our team better will be invited into our preseason training camp so they can train with the first team and see how they compare to actual professional players as opposed to top collegiate prospects,” Vallow said.

According to Vallow, who played professional soccer from 1999-2010 and now focuses on coaching, soccer combines are an essential contrivance for talent evaluators. “As professional coaches, we certainly can’t fly around all over the country, watching game after game,” he said. “It’s much better to be able to evaluate players in a live situation as opposed to on video. Being able to see games from start to finish [and] being able to see training sessions is going to be a valuable tool for us.”

Walker currently trains for the combine under the tutelage of former EWU goalkeeper and current assistant director of athletic performance Lisa Dimak. Walker and Dimak were teammates during the 2009 and 2010 seasons. “Jamie’s always been such a great person to work with,” Dimak said. “When she got on the team, her and I clicked right away [and] our personalities meshed. When we would train together, we would just work off each other and push each other and I think that’s what helped bring her to where she is right now.

“She’s always been the kind of girl that wants to be better. Any way she can better herself, she’s always going to go ahead and grab that opportunity. She will never settle for anything less than she deserves.”