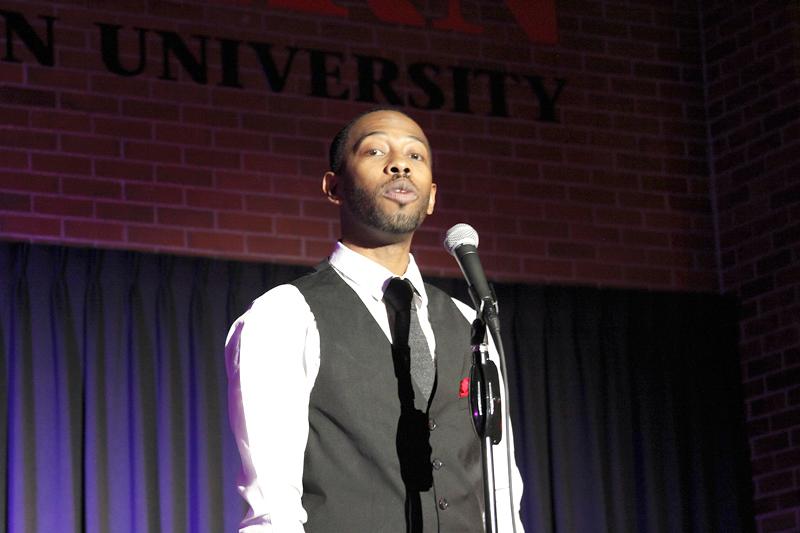 Rudy Francisco performs one of his poems at his Feb. 14 show. Photo by Al Stover

This was the phrase Rudy Francisco had the audience say before he began one of his poems.

Francisco is a spoken word artist and poet from San Diego who was brought in to perform at the PUB MPR by Eagle Entertainment, Feb. 14.

Francisco immediately engaged the audience by having everyone in the back seats move to the front tables because he needed their energy. He then recited two short poems, one titled “I Believe.”

Francisco also performed “Dear Starbucks Girl” and “Scars/10 Things I Would Like to Say to my Ex Girlfriend,” which was about a girl he used to date. He also shared a poem about what he would say to his high school self.

Other pieces Francisco performed included “A Letter to Chris Brown” and “My Honest Poem,” which he penned after he realized he was writing for glory rather than writing for enjoyment.

“It got to the point to where I was performing, and I stopped and thought, ’Whose voice is it?,’” Francisco said. “It doesn’t sound like mine.”

In addition to reciting his poems, Francisco talked about the first time he performed on stage. He had attended an open mic night with some friends who had signed him up to perform without his knowledge.

Francisco also shared his experience of winning the “Last Chance Slam” in Virginia and placing first at the 2010 Individual World Poetry Slam tournament. Although he had won the tournament, he had stopped writing after listening to critics who had said he did not deserve to win the title.

“It’s hard to win something that big because then you feel like everyone is watching you,” Francisco said.

After some words of encouragement from past champions, Francisco wrote a poem about a kid named Javier he met in the fifth grade who had a pet chameleon, also named Rudy.

Keeping with the spirit of Valentine’s Day, Francisco’s last poem was a love poem. Prior to performing his last poem, Francisco had a challenge for members of the audience who aspired to be writers like him.

EWU student DeVonte Howard is a spoken word artist who has watched Francisco on the Internet. For Howard, it was “surreal” for him to watch someone he followed perform right in front of him.

“You feel the energy through the screen, but when it’s live it is a different situation,” Howard said. “He interacts with the audience and tells a story.”

For student Arianna Chamberlin her favorite part was the way Francisco was open to sharing his life experiences with the audience.

“It wasn’t just someone standing up there speaking. He had passion,” Chamberlin said.“It kind of inspires you to reflect on what happens [in life] and it kind of makes you want to write something.”

In addition to the EWU students, Han Wu and Tai Jade Kliebphipat, members of Gonzaga’s women’s golf team, drove to Cheney to watch Francisco perform. For Wu, her favorite part of the performance was the love poem Francisco performed at the end.

“It was really good” Wu said. “His raw emotion, … it really hit me. It was worth the drive.”

Although the crowd was small, Francisco felt the energy from the audience. He hoped that the audience took away that poetry is for everyone, even for people who do not think they are poets.