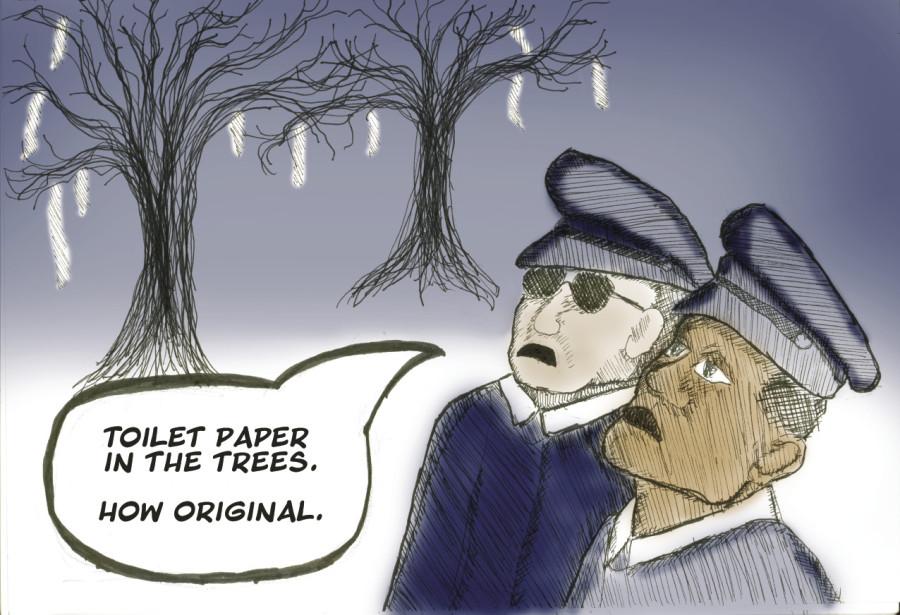 An officer noted that the trees behind the JFK library had been toilet papered. There are currently no suspects. Illustration by Amy Meyer

A vehicle almost hit a pedestrian in a crosswalk near Morrison Hall. The driver did not notice that someone was crossing and had to slam on his breaks in icy conditions, nearly causing a student to be hit. The driver was cited and released for failure to yield at a crosswalk.

A windowpane on the west side of Reid Elementary was broken. It looked to have been hit several times with an unknown object, however no entry was gained to the building.

Eagle Express Market employees reported a student stealing candy bars. No arrest has been made yet.Jan. 24

A student reported that her car had been damaged while parked in Lot 4. She drove the car to another location and noticed the damage when she got out.

Eagle Express Market employees reported a second incidence of a student stealing candy bars. No arrests have been made.

A student reported that her bike was stolen. The bike, a Magma brand dark red mountain bike, was last seen at Monroe Hall on the bike rack on Jan. 17.

An officer observed that the trees behind JFK library had been toilet papered. There are no suspects at this time.

EWU police detained a student for interview regarding a possible domestic violence situation. The student was later arrested and booked into Spokane County jail.

A student reported that his or her car had been vandalized while parked in the URC parking garage. Scratches on the hood, sides and rear and a broken antenna caused about $1,500 worth of damage. There are no suspects at this time.

An underage student on the fourth floor of Dressler hall was arrested for possession of marijuana under 40 grams.

EWU officers assisted the Cheney Police Department with a reported harassment. The incident turned out to be a verbal altercation only; no one was arrested.

A student reported that his or her backpack had been stolen from the shelf area outside the entrance to the bookstore. Two textbooks were inside. The backpack and books were later recovered in Isle Hall.